in arte Pietra International Artist, she was born in 1963 in Venticano (Avellino). She is specializing in Graphic Design and Photography, She attended the Academy of Fine Arts of Naples, specialization in painting. She began her career very young always receiving critical acclaim, audience and acclaim from important personalities. She’s been Master Antonio Corpora’s disciple, she knows and attends historicized contemporary Master and World Celebrities who have made the history of the TWENTIETH CENTURY, from Papa Giovanni Paolo II, to Robert Carroll, from Orpheus to DRUMS Eernesto Treccani, from Aligi Sassu to Antonio Corpora, from Mario Verdone to Angelo Branduardi, from Nicola Piovani to Vittorioo Sgarbi, from Roberto Murolo to Roberto Benigni, from Lina Wertmuller to Willy Pasini etc.

Pietra Barrasso has performed for the very important work of Typography Columbus Chamber of Deputies, Braille Code from the curtain of Montecitorio.

She has made cover for graphics of LEEP RECORDS CD “Pronto Mosca – Pronto Washington” She collaborates with Gangemi Editore for the realization of “Colore e Pietra”’s series.

She concernes about graphic and layout of “Idea” magazine.

She’s selected by the Art Critic VITIORIO SGARBI for the 54th BIENNIAL : INTERNATIONAL ART of VENICE - ITALY Pavilion - Viterbo 2011 She’s been choose by Prof. Giulia SILLATO for join at “Metaformismo”, and she take a part at collective exhibitions about “L’Arte Contemporanea nelle antiche Dimore”. 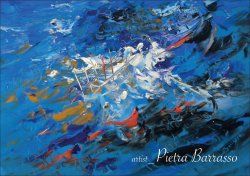